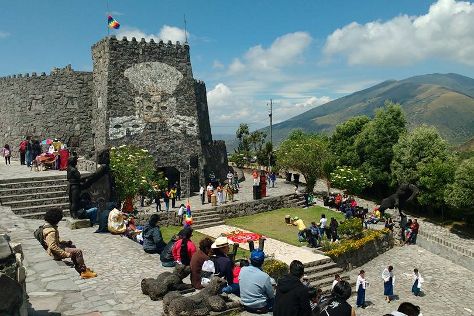 Get a sense of the local culture at Museo Templo del Sol Pintor Ortega Maila and Iglesia y Convento de San Francisco. Explore Quito's surroundings by going to Cuicocha (in Cotacachi), Cascada de Peguche (in Peguche) and Cayambe (Middle of the World, Quitsato, &more). Spend the 11th (Tue) among the fascinating landscape of Cotopaxi National Park. There's lots more to do: contemplate in the serene atmosphere at Fundacion Iglesia de la Compania, explore the world behind art at Casa Museo Guayasamin, make a trip to Mitad Del Mundo, and see the interesting displays at Intinan Museum.

For more things to do, other places to visit, where to stay, and tourist information, go to the Quito travel route planner.

If you are flying in from India, the closest major aiports are Mariscal Sucre International Airport and Cotopaxi International Airport. In June in Quito, expect temperatures between 26°C during the day and 17°C at night. Wrap up your sightseeing on the 28th (Fri) to allow time to travel back home.
more less