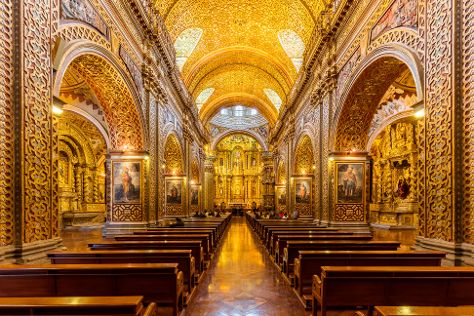 Change things up with these side-trips from Quito: Cuicocha (in Cotacachi), Pululahua Geobotanical Reserve (in Calacali) and Cascada de Peguche (in Peguche). Spend the 23rd (Thu) among the fascinating landscape of Cotopaxi National Park. Spend the 26th (Sun) exploring nature at Reserva Ecologica Antisana. Next up on the itinerary: admire the striking features of Fundacion Iglesia de la Compania, explore the world behind art at La Capilla Del Hombre, deepen your understanding at La Ronda, and make a trip to Mitad Del Mundo.

For traveler tips, where to stay, maps, and more tourist information, go to the Quito trip tool.

If you are flying in from The Netherlands, the closest major aiports are Mariscal Sucre International Airport and Cotopaxi International Airport. Expect a daytime high around 26°C in April, and nighttime lows around 18°C. Finish your sightseeing early on the 16th (Sat) to allow enough time to travel back home.
more less