Famous for the groves of coconut trees from which it takes its name, Kovalam offers a long, white sandy beach on the Arabian Sea.

On the 17th (Tue), enjoy the sand and surf at Kovalam Beach, then kick back and relax at Lighthouse Beach, then contemplate the long history of Beemapally Mosque, and finally contemplate in the serene atmosphere at Sree Padmanabhaswamy Temple. On the next day, explore the activities along Vellayani Lake, then indulge in some personalized pampering at some of the best spas, and then tour the pleasant surroundings at Hawa Beach.

To see where to stay, photos, ratings, and tourist information, go to the Kovalam trip itinerary maker website .

New Delhi to Kovalam is an approximately 5-hour flight. You can also drive; or take a train. When traveling from New Delhi in December, plan for somewhat warmer days in Kovalam, with highs around 36°C, while nights are much hotter with lows around 28°C. Finish up your sightseeing early on the 18th (Wed) so you can travel to Thekkady.
more less

Things to do in Kovalam 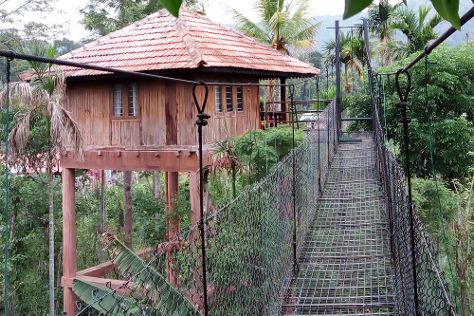 Centered on an artificial lake, Thekkady provides a sanctuary to a diverse set of animals and plant species.

To find ratings, maps, more things to do, and other tourist information, read Thekkady trip planner.

Traveling by combination of flight and taxi from Kovalam to Thekkady takes 3.5 hours. Alternatively, you can drive; or take a bus. Finish your sightseeing early on the 20th (Fri) so you can travel to Amritsar.
more less

Things to do in Thekkady 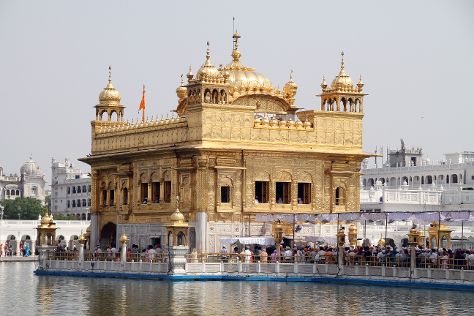 A holy city, Amritsar stands as the spiritual and cultural capital of Sikhism, and the location of the religion's most revered and holiest shrine.

Step off the beaten path and head to Shri Pindori Dham Temple and Dera Baba Jaimal Singhji. Popular historic sites such as Harmandir Sahib and Gurudwara Baba Atal Rai are in your itinerary. There's much more to do: look for all kinds of wild species at Harike Wetland and Bird Sanctuary, contemplate in the serene atmosphere at Goindwal Sahib, and delve into the distant past at Pul Kanjari.

To find reviews and more tourist information, use the Amritsar trip planner .

Traveling by combination of taxi and flight from Thekkady to Amritsar takes 9 hours. Alternatively, you can do a combination of bus and flight; or drive. In December in Amritsar, expect temperatures between 24°C during the day and 6°C at night. Cap off your sightseeing on the 25th (Wed) early enough to travel to New Delhi.
more less

Things to do in Amritsar

Designed by notable English architects and proclaimed India's capital in 1931, New Delhi sits in the middle of a sprawling metropolitan area with a population of over 25 million.

Start off your visit on the 26th (Thu): take in the spiritual surroundings of Gurudwara Sis Ganj Sahib, steep yourself in history at Raj Ghat, then make a trip to India Gate, then take in nature's colorful creations at Humayun's Tomb, and finally steep yourself in history at Rajpath. On the 27th (Fri), you'll have a packed day of sightseeing: contemplate in the serene atmosphere at Chhatarpur Temple and then surround yourself with nature on a nature and wildlife tour.

For other places to visit, photos, maps, and other tourist information, refer to the New Delhi trip planner.

You can fly from Amritsar to New Delhi in 3 hours. Alternatively, you can drive; or take a train. Expect somewhat warmer evenings in New Delhi when traveling from Amritsar in December, with lows around 10°C. Wrap up your sightseeing by early afternoon on the 28th (Sat) to allow time for travel to Jaipur.
more less

Things to do in New Delhi 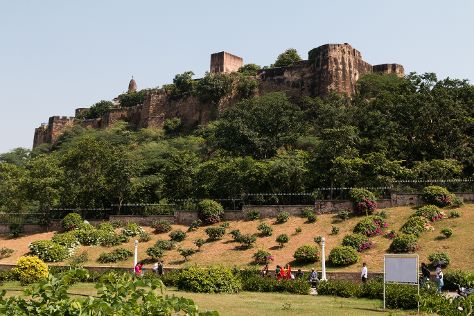 Known as the "Pink City" because of the color of the stone used for many of its notable structures, Jaipur draws visitors with its chaotic street life and a slew of colorful bazaars selling everything from handmade pottery to tie-dye scarves.

Deepen your sense of the past at sights like Khatu Shyam Ji Temple and Amber Palace. Get a sense of the local culture at Moti Dungari Temple and Jal Mahal. There's still lots to do: identify plant and animal life at EleSafari, admire the landmark architecture of Diwan-e-Khas Hall of Private Audience, examine the collection at Maharaja Sawai Man Singh II Museum, and see the sky in a new way at Jantar Mantar - Jaipur.

Fly from New Delhi to Jaipur in 2.5 hours. Alternatively, you can drive; or take a bus. In December, daytime highs in Jaipur are 30°C, while nighttime lows are 11°C. Finish up your sightseeing early on the 1st (Wed) so you can go by car to Agra.
more less

Things to do in Jaipur

To find other places to visit, ratings, reviews, and tourist information, go to the Agra trip itinerary planning tool .

Traveling by car from Jaipur to Agra takes 3.5 hours. Alternatively, you can take a train; or take a bus. Expect slightly colder weather when traveling from Jaipur in January: highs in Agra hover around 22°C, while lows dip to 8°C. Finish your sightseeing early on the 2nd (Thu) so you can travel to Varanasi.
more less

Things to do in Agra

Tomb of Akbar the Great
Find places to stay Jan 1 — 2:
Hotels on TripAdvisor
Homes on Airbnb
Highlights from your plan

©
Tomb of Akbar the Great

A sacred city for Hindus and thought by many to be the place where Buddhism formed as a religion, Varanasi leaves an imprint on the hearts and minds of visitors regardless of their creed, race, or religion.

For photos, ratings, where to stay, and more tourist information, go to the Varanasi online road trip planner .

Getting from Agra to Varanasi by flight takes about 2.5 hours. Other options: drive; or take a train. In January, daytime highs in Varanasi are 24°C, while nighttime lows are 11°C. Finish your sightseeing early on the 4th (Sat) so you can travel to Pelling.
more less

Things to do in Varanasi

The small hill station of Pelling draws visitors with its impressive nature and abundance of hotels and resorts.

Start off your visit on the 5th (Sun): delve into the distant past at Rabdentse Ruins, take in the spiritual surroundings of Pemayangtse Monastery, then contemplate in the serene atmosphere at Tashiding Monastery, and finally contemplate in the serene atmosphere at Dubdi Monastery. Keep things going the next day: contemplate the waterfront views at Kartok Lake, take in the dramatic scenery at Kanchenjunga Falls, and then make a trip to Coronation Throne Of Norbugang.

For where to stay, reviews, more things to do, and more tourist information, go to the Pelling road trip planning tool .

Do a combination of flight and taxi from Varanasi to Pelling in 7.5 hours. Alternatively, you can drive; or do a combination of train, flight, and taxi. In January, daytime highs in Pelling are 26°C, while nighttime lows are 10°C. Wrap up your sightseeing on the 7th (Tue) to allow time to travel to Guwahati.
more less

Things to do in Pelling

A place to engage with the culture of the northeast, Guwahati represents the largest city in the region, and acts as a stepping stone for wider explorations.

Start off your visit on the 7th (Tue): look for all kinds of wild species at Pobitora Wildlife Sanctuary, head outdoors with Awe Rides, then stroll the grounds of Guwahati War Cemetery, and finally contemplate in the serene atmosphere at Umananda Temple. Here are some ideas for day two: take in the spiritual surroundings of Janardana Temple, then contemplate in the serene atmosphere at Ugratara Temple, and then explore the striking landscape of Nameri National Park.

To find other places to visit, where to stay, reviews, and tourist information, you can read our Guwahati trip planner .

Things to do in Guwahati

Nestled on the banks of the Hooghly River, Kolkata is a booming metropolis, India's second largest city, and the country's cultural hub, known for being the birthplace of major artistic and literary movements.

For more things to do, maps, other places to visit, and tourist information, use the Kolkata (Calcutta) route site .

You can do a combination of taxi and flight from Guwahati to Kolkata (Calcutta) in 3.5 hours. Alternatively, you can drive; or take a train. In January in Kolkata (Calcutta), expect temperatures between 29°C during the day and 15°C at night. Wrap up your sightseeing on the 10th (Fri) early enough to travel to Mumbai.
more less

Things to do in Kolkata (Calcutta)

On the 11th (Sat), look for all kinds of wild species at Aarey Colony, explore the fascinating underground world of Kanheri Caves, and then stroll through Aksa Beach. On the next day, pause for some serene contemplation at Mount Mary Basilica and then take in the spiritual surroundings of Mahalakshmi Temple.

To see other places to visit, more things to do, and more tourist information, read our Mumbai online day trip planner .

You can fly from Kolkata (Calcutta) to Mumbai in 5 hours. Alternatively, you can do a combination of flight, taxi, and bus; or drive. Prepare for a bit warmer weather when traveling from Kolkata (Calcutta) in January: high temperatures in Mumbai hover around 36°C and lows are around 19°C. Finish up your sightseeing early on the 12th (Sun) so you can travel to Goa.
more less

Things to do in Mumbai 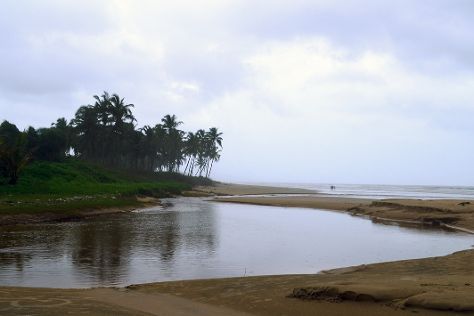 On India's western coastline, the former Portuguese colony of Goa tells a visibly different story than the rest of India.

Escape the urban bustle at Betalbatim Beach and Baga Beach. Explore hidden gems such as Majorda Beach and Church of St. Francis of Assissi. There's lots more to do: steep yourself in history at Reis Magos Fort, admire the landmark architecture of Basilica of Bom Jesus, and take in the spiritual surroundings of Mangeshi Temple.

You can do a combination of flight and bus from Mumbai to Goa in 5.5 hours. Other options are to drive; or take a train. Traveling from Mumbai in January, expect somewhat warmer with lows of 26°C in Goa. Finish your sightseeing early on the 15th (Wed) to allow enough time to travel back home.
more less

Things to do in Goa