You've added Oka Beach, Union Libre Cidre & Vin, Quartier des spectacles, and other attractions to your itinerary. You'll explore the less-touristy side of things at Upper Canada Village and Museum of Jewish Montreal. Do some cultural sightseeing at Notre-Dame Basilica and Lieu Historique National du Canal-de-Lachine. Explore the numerous day-trip ideas around Montreal: Historic SDG Jail (in Cornwall), Abbaye de Saint-Benoit-du-Lac (in Saint-Benoit-du-Lac) and Musee canadien de l’Arme et du Bronze (in Granby). There's much more to do: take in the architecture and atmosphere at St. Patrick's Basilica, explore the world behind art at Musee des beaux-arts de Montreal, explore the galleries of ImpresArts, and contemplate in the serene atmosphere at Saint Joseph's Oratory of Mount Royal.

To find more things to do, traveler tips, photos, and other tourist information, you can read our Montreal day trip site.

Marlborough, USA to Montreal is an approximately 6.5- hour combination of car and flight. Expect a daytime high around 78°F in August, and nighttime lows around 63°F. Cap off your sightseeing on the 11th (Tue) early enough to go by car to Quebec City.
more less 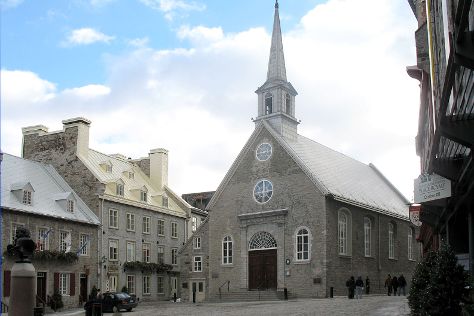 Kick off your visit on the 11th (Tue): steep yourself in history at Morrin Centre, take a stroll through Terrasse Dufferin, appreciate the extensive heritage of Place Royale, then contemplate in the serene atmosphere at Eglise Notre Dame des Victoires, and finally take in the architecture and atmosphere at Cathedral of the Holy Trinity.

For where to stay, photos, maps, and tourist information, go to the Quebec City trip planner.

Traveling by car from Montreal to Quebec City takes 3 hours. Alternatively, you can take a bus; or take a train. Expect a daytime high around 78°F in August, and nighttime lows around 59°F. Finish up your sightseeing early on the 11th (Tue) so you can go by car to Montreal.
more less

©
Cathedral of the Holy Trinity

You've added Jean-Dore Beach, Avie Spa & Coiffure, Quartier Latin, and other attractions to your itinerary. On the 12th (Wed), see the interesting displays at Magasin General Le Brun, take a stroll through Rue St. Denis, take a stroll through Rue Ste.-Catherine, contemplate the long history of Avenue McGill College, then soak in style at Avie Spa & Coiffure, and finally enjoy the sand and surf at Jean-Dore Beach. On the 13th (Thu), you'll have a packed day of sightseeing: take in the architecture and atmosphere at Eglise de Saint-Hubert, explore the landscape on two wheels at Chambly Canal, then take an in-depth tour of Montreal Holocaust Memorial Centre, then look for gifts at Carrefour Laval, and finally get your game on at Laser Quest Montreal.

Drive from Quebec City to Montreal in 3 hours. Alternatively, you can take a bus; or take a train. You will have some time to spend on the 14th (Fri) before leaving for home.
more less