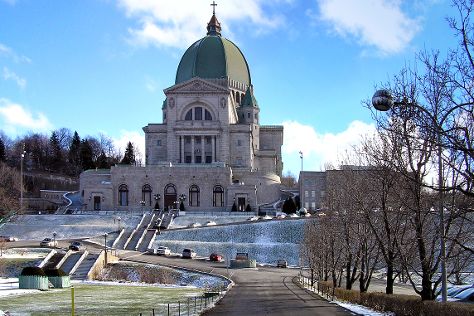 Kick off your visit on the 10th (Wed): get engrossed in the history at Pointe-a-Calliere, Montreal Archaeology and History Complex, take in the architecture and atmosphere at Notre-Dame Basilica, and then walk around Mount Royal Park.

To find reviews, more things to do, and tourist information, refer to the Montreal vacation maker site.

Kansas City, USA to Montreal is an approximately 9.5-hour flight. You can also drive; or do a combination of train and car. The time zone changes from Central Standard Time to Eastern Standard Time, which is usually a 1 hour difference. Expect slightly colder temperatures when traveling from Kansas City in July; daily highs in Montreal reach 78°F and lows reach 64°F. Finish up your sightseeing early on the 10th (Wed) so you can travel to Boston.
more less

Rich in museums, restaurants, shops, and historical sites, Boston attracts over 16 million visitors each year. New England's largest and most influential city, Boston ranks among the world's major centers of education and culture.

On the 11th (Thu), get engrossed in the history at Boston Tea Party Ships & Museum, thenget a new perspective on things with Boat Tours & Water Sports, thenwander the streets of North End, and finally contemplate the long history of Captain Jackson’s Historic Chocolate Shop and the Printing Office of Edes and Gill. On the 12th (Fri), you'll have a packed day of sightseeing: explore the world behind art at Museum of Fine Arts, admire the natural beauty at Boston Public Garden, thenstroll around Boston Common, thenbuy something for everyone on your list at Faneuil Hall Marketplace, and finally hunt for treasures at Quincy Market.

To see photos, reviews, where to stay, and more tourist information, use the Boston road trip planning tool.

Traveling by flight from Montreal to Boston takes 4.5 hours. Alternatively, you can drive; or take a bus. In July, daily temperatures in Boston can reach 83°F, while at night they dip to 67°F. Finish your sightseeing early on the 12th (Fri) to allow enough time to travel to New York City.
more less

Things to do in Boston

Writer Pearl Buck once called New York City “a place apart,” and this giant urban center remains unlike any other in the world.

On the 13th (Sat), admire the masterpieces at The Metropolitan Museum of Art and then go for a walk through Central Park. On the 14th (Sun), you'll have a packed day of sightseeing: pause for some photo ops at 9/11 Memorial, choose your vessel at Tribeca Sailing, thenappreciate the history behind Statue of Liberty National Monument, and finally take in panoramic vistas at Empire State Building.

Fly from Boston to New York City in 3.5 hours. Alternatively, you can drive; or take a train. In July, daytime highs in New York City are 86°F, while nighttime lows are 72°F. Wrap up your sightseeing on the 14th (Sun) to allow time to take a train to Washington DC.
more less

Things to do in New York City

The capital of the United States, the District of Columbia contains the lion's share of the country's most treasured monuments, memorials, and public museums.

To find reviews, more things to do, other places to visit, and more tourist information, go to the Washington DC trip itinerary planner.

Traveling by train from New York City to Washington DC takes 3.5 hours. Alternatively, you can fly; or drive. In July, daytime highs in Washington DC are 89°F, while nighttime lows are 73°F. Cap off your sightseeing on the 16th (Tue) early enough to travel back home.
more less

Things to do in Washington DC